After a rapid and massive weight loss, there is a sudden change in BMI which leads to skin and soft tissue becoming redundant with a poor tone. These patents are always seeking an aesthetic outcome to improve their body image and self esteem. The first body contouring surgery is usually the lower body lift including abdominoplasty. Modifications of those surgeries occurred during the 20th century with a variety of incision designs and techniques to reach the best the esthetic outcome. Because belt lipectomy procedures are still not widely accepted, still considered time consuming and difficult to perform and well known for their high complication rate we present the full lower circumferential torsoplasty as a good alternative for those procedures.

The increase of bariatric surgery procedure and self-directed weight loss has led to an increase in the number of patients requesting body contouring surgery [1]. The most apparent deformities that they complain of are breast ptosis, skin laxity of limbs and, above all, abdominal apron, which objectively is the greatest of these complaints. The abdomen should not be considered isolated from surrounding areas. When doing aesthetic plastic surgery of the abdomen, the surgeon must take into consideration neighboring areas such as the back, waist, and buttocks [2].

The basic principle of body contouring after massive weight loss is to remove the redundant cutaneous tissue aiming to attenuate esthetic, physical (such as ambulation and sexual activity), medical (such as intertrigo) and/or psychological handicaps [3].

An extended dermolipectomy or beltplasty should be considered for patients with lateral and back skin excess after massive weight loss. The length of the procedure was 6-9 hours according to Lockwood’s first publications [4]. A 270-degree, extended abdominoplasty to contour significant lateral truncal skin laxity and lipodystrophy suggested by Hunstad and Repta and later modified by Hamra [5] which has been criticized by Derunz [6] regarding the gluteal ptosis, was the backbone of our technique.

This paper present our experience in 270 degree extended abdominoplasty with trochanteric and gluteal lift via gluteal autoaugmentation (lower cirunfrential torsoplasty LCT) as a single stage.

The procedure was performed on 80 patients (67 women and 13 men) at private hospitals in Kuwait by all authors from January of 2014 to January of 2017.

The average follow-up period was 18 months (range 7 months to 1.4 years). The Ages of the patients ranged from 23 to 54 years. The preoperative BMI of the patients was 28 to 30 in females and 32 in males. All patients have significant truncal skin redundancy over the abdomen, trochanteric region and back. Preoperative routine medical evaluation and clearance were done for all patients.

The patients were marked in the standing and lying position. The vertical midline is marked anteriorly and posteriorly in the standing position. The limit of lower back incision is marked starting 5 cm from the middle line and 16-18 cm from the lower gluteal crease on maximal stretch. This is the mirror image of the anterior abdominoplasty lower incision. We proceed with a straight horizontal line laterally to the waist so that the final scar lies always on the trochanteric region and never on the abdominal skin. The lower anterior abdominal incision is marked 4.5 to 5.5 cm from the commissure on maximal stretch directed laterally until both line join each other. With the “matarasso manouver” [7] and the “grasp test” [8] the amount of laxity and tissue excised on the anterior abdomen and waist region respectively were determined giving the limit of the upper incision. Vertical lines are marked are marked to compare the symmetry of the planned resulting scar which is hidden by standard underwear. If needed, the areas to be treated with liposuction are marked by circling the fatty excess. We have been able to minimize major complications by applying the strict safety guidelines for all of our patients stated clearly by Rohrich and his colleagues [8].

The patient was initially positioned prone for liposuction, excision of the redundant skin is done either by de-epithelization only if the laxity was more in the upper gluteal region or by de-epithelization and creation of a pocket caudally 3-5 cm beneath the lower flap to accommodate the fibro fatty flap if the redundancy affect the mid gluteal zone. Fat grafting can be done either in the same stage or later stage to improve the result. Closure of the back in 2 layers up to the mid axillary line. No drains were inserted following this step.

It is important to mention that the severe lower zone gluteal laxity will never be corrected unless combined with vertical thigh lift done at later stage.

In the supine position Traditional abdominoplasty is carried as usual with application of 2 closed system drains. The Miami Beach chair position [7] is set to remove all redundant tissue and helps during closure.

80 patients underwent lower circumferential torsoplasty. All patients were hospitalized and remained inpatients for an average of 3 days (range, 3 to 5 days). The average operative time was 3.4 hours (range, 4 to 5 hours).

There were no major complications nor deaths. The complications were in the form of seromas, hypertrophic scars, skin necroses smaller than 2 cm, wound infection and wound dehiscence requiring frequent dressings, eight patients required minor revision for their scars (10%) and 5 patients for resuturing the dehiscence (5%).

Patients were uniformly pleased with their results, the patients claimed they acquired a healthier lifestyle. A second stage lipofilling for the gluteal region was done for 6% of the patients who were seeking augmentation despite of the satisfactory lifting result. Examples of results are presented in Figures 1-4. 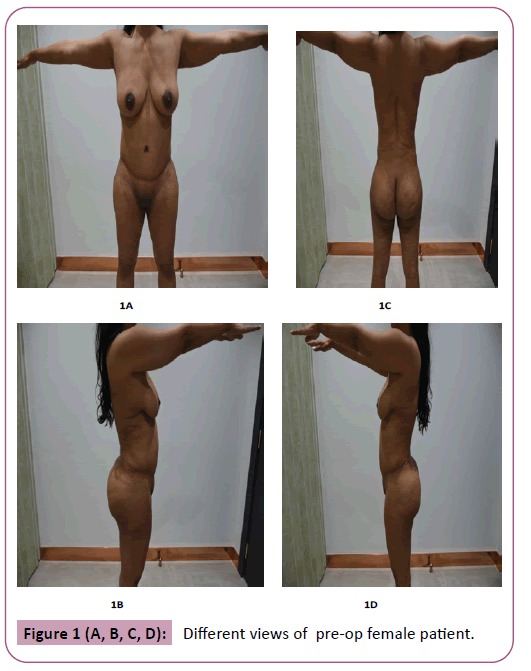 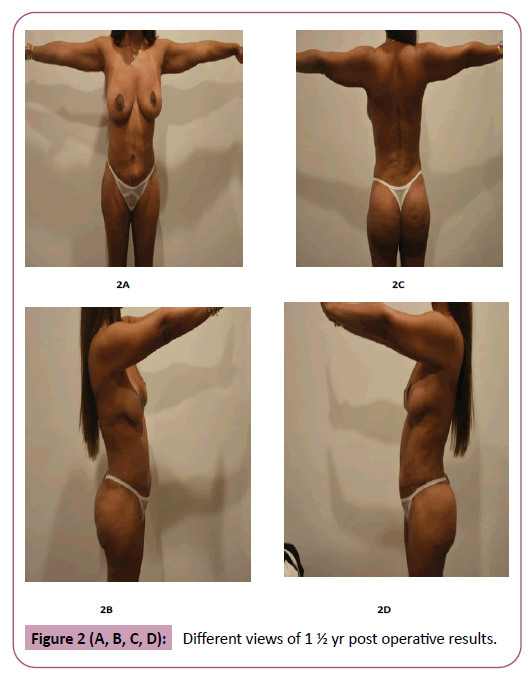 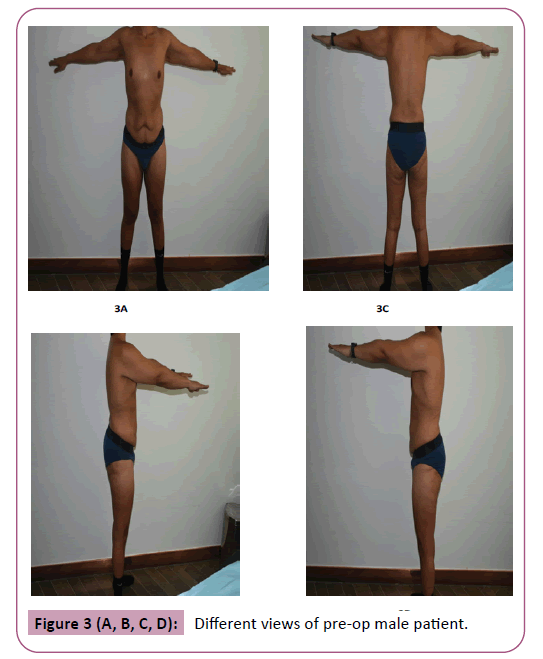 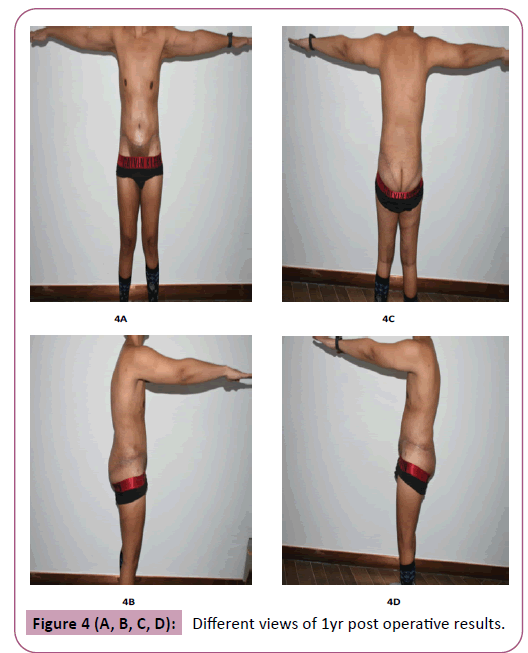 Abdominoplasty and Abdominal wall surgery was described very early in history by the Roman writer Pliny the Elder.

Something that could resemble an abdominal apronectomy [9]. Abdominoplasty was first described by Kelly in 1899, modified and improved by Thorek 1939 with the preservation of the umbilicus. Pitanguy 1967 and to Callia 1967 suture the fascia of the rectus muscles, in order to cure diastasis [10-12].

To enhance the contour and appearance of a patient’s abdomen, waist, lower back, buttocks, and thighs circular dermolipectomy was first described by Somalo in 1940. The term belt lipectomy, first used by Gonzalez-Ulloa [13] with a high excision in the back and vertical wedge resection till 1988 the posterior incision was placed high in the waistline [14] which breaks the aesthetic unit principle and makes this component of the scar unacceptable to most patients [15].

The modern concept of the aesthetic abdomen as described by Lockwood [16] consists of a contoured lateral trunk and inguinal region with a deep waist concavity, convexity of the hypogastrium, concavity of the epigastrium, and a valley between the rectus muscle bulges, with a vertically oriented umbilicus. In the 1995s, Lockwood described various lower body-lift procedures, including the high lateral tension abdominoplastys. Lockwood [17,18]. In the following years, technical improvements and modifications were made by Pascal and Le Louarn [19] and wedge excisions were abandoned [20].

Abdominal dermolipectomy with the classic incisions may give poor final results, because of skin bulges remaining in the flanks. Therefore, extension of the transverse inferior abdominal incisions to the flanks and dorsal area has been proposed [21]. Hunstad and Repta in 2009 [22] were the first to stress out the importance to extend the incision to treat lateral laxity and to avoid lateral dog ears; they called this procedure ‘‘extended abdominoplasty’’ to end up with the famous say of Rohrich never sacrifice shape for scar [23].

An understanding of truncal laxity and adhesion has led to the modification of abdominoplasty method for greater efficacy. The interpretation of the superficial fascial system (SFS) and Zones of adhesion where the SFS is firmly adherent to the muscle fascia, producing the folds and bulges of normal body contour by Lockwood in 1991 [18] has been the cornerstone of our understanding of abdominal excision dynamics until Taylor in 2016 [24] published the adhesion zone diagrams and patterns of laxity where was generally reduced over the posterior midline, upper gluteal border, lumbar fascia, and the buttock crease. While some of these zones need to be released when performing body contour surgery to allow skin to advance for excision and to transmit tension distally improving body contour [24]. We reached that some of these addhesions zones should not be breached as it add support for anchoring the mobilized lifted tissue. Accordingly we designed the incision and the extent of resection for the Sacral sparing belt plasty.

Aesthetic deformities of the abdomen have been subject to different classification systems [25] Based on the the most clear with the highest degree of inter observer reproducibility: Matarasso’s classification system in 1991 [26] and modified by Mejia 2012 [27] with his clear statement about the posteroinferior incision that follows a transverse or slightly upward direction from lateral to medial and stays 5–12 cm away from the posterior midline.

More over circumfrential torsoplasty described previously and the rating scale of pittsburg was deficient in treating the severe laxity which now-a-days is resulting from aggressive weight loss and the high expectation of the patients we deal with. Therefore we modified the technique applied by Hamra by adding autoaugmentation described in the technique and borrowing the skin during closure to improve the gluteal region shape for male and females with maximal trochanteric lift.

We reach a new classiffication in nomenclaure dividing the abdominoplasty patient into 4 categories regarding the extent of the deformity and the laxity to be treated: all around scar beltoplasty which to our experience is no need to be practiced because for 80 patients underwent beltoplasty the sacral area never found redundant and the area of the back if needed can be treated by liposuction for more definition.

An important disadvantage of circumferential abdominoplasty is the size of the resultant scar which surrounds the abdomen and dorsum Of the Patients [28]. It is very important to apply the aesthetic unit principle while making these markings. Most of the previous publications about extended abdominoplasty have situated the incision in the waistline leading to disruption of the flank aesthetic unit. The posterior markings must be adjusted so that the final scar resides along the lateral limits of the gluteal aesthetic unit following an imaginary curve with the sacral triangle because a high incision makes the buttocks appear elongated and unaesthetic [27,28]

The desired goal of this surgical procedure is improving the patient profile [1] to deal with the midlle line laxity eliminating the redundancy of fat and skin, to recreate the competence of the abdominal wall, to correct pubic ptosis and reshape the pubic area, [2] addressing the trochanteric laxity to avoid the need of lateral thigh lift and to induce gluteal enhancement [3].

The terminology of circular procedures is still debated [4]. According to the definition by Hamra, Circular abdominoplasty involves horizontal excision and low incision lines in the back, flanks, and groinarea, similar to the body lift, but without lateral thigh undermining; it allows a good vertical lift of these regions. The our technique Sacral sparing belt plasty offer exact lift without the higher incisions in the back and undermining of the upper dorsal flap Involved in Belt lipectomy. The traditional belt lipectomy may address the back rolls area but with a more conspicuous scar line and higher risks of seroma formation.

In our experience, lower cirumfrential torsoplasty LCT is a reliable procedure, contrary to popular opinion. No undermining and minimal liposuction could reduce the complications rate. SSBP have had excellent aesthetic results with minimal complications in abdominal contouring of the patient with moderate to large circumferential excess of skin, fat, and musculoaponeurotic laxity. It is safe and effective method for patients with diffuse lipodystrophy or generalized skin laxity, or after massive weight loss. With recovery period very similar to traditional abdominoplasty procedures.