Background: The hair restoration surgery is performed as a ‘strip harvest’ surgery or ‘follicular unit extraction’. These two procedures can be combined in a single sitting to increase the number of hair. The study was conducted as to share the experience of both the procedures in a single session.

Materials and methods: The study was conducted in a private hair restoration surgery clinic. Only the patients undergoing combined surgery, i.e., FUT and FUE in the same session, were included after informed consent. The procedure was performed under local anaesthesia. First of all, the area for FUE was marked and then the strip was marked after checking the vertical scalp mobility. An area of about 1 cm was left on either side of the wound margins and FUE was performed using 0.8–1.0 mm punch with a motorized machine. An antibiotic ointment was applied on the donor area. Oral antibiotics were prescribed for five days. Any complication arising in these patients was managed accordingly.

Conclusion: Combining both the techniques increases the total number of grafts which results in patient satisfaction.

Modern day surgery is characterized by a natural looking result with minimal implications on the donor area. Unfortunately the donor area on scalp is limited; about 20– 25% of the total scalp [1]. About half of the density (10–12% of the donor hair) can be harvested without significant noticeable changes in one or more stages [2]. There are two basic techniques to remove hair from the scalp donor area. One technique involves the removal of a part of scalp by surgery, known as follicular unit strip surgery (FUSS). The donor wound is closed primarily which results in a linear scar on the back of the head which is visible if the hair are trimmed very short. The other technique involves the removal of individual ‘follicular units’ with the help of machines or robots and is known as follicular unit extraction (FUE). A few years ago, the two techniques were performed separately but with the passage of time and the demands of the surgeons and patients, the combination of these two techniques is carried out to decrease the down time required in the recovery period in 2 separate surgeries at different times. There have been various models described in the literature. A few surgeons have attempted to combine these techniques but no study of a large scale has been presented [3-5].

The following study was conducted to share the experience and to know the effectiveness of both the procedures in a single session.

The study was conducted in a private hair restoration surgery clinic. Only the patients undergoing combined surgery, i.e., FUT and FUE in the same session, were included. Patients undergoing FUT or FUE alone were not included. Similarly the patients undergoing FUT and FUE on alternate days were also excluded. The informed consent was obtained from all the patients. The procedure was explained in details in the preoperative consultation. The procedure was performed under local anesthesia. The donor areas were assessed for the expected number of grafts. First of all, the area for FUE was marked and then the strip was marked after checking the vertical scalp mobility. The area was injected using Xylocaine with adrenaline in 1:200,000 dilutions. The strip was harvested in prone position. The donor wound was closed primarily in single layer using non-absorbable sutures. The stitches were removed after 10–13 days. The donor strip was then slivered and FUs were prepared by the technicians. An area of about 1 cm was left on either side of the wound margins (Figure 1). 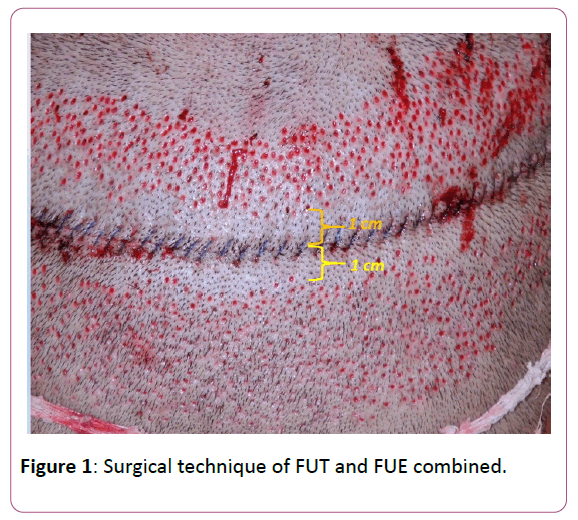 Later FUE was started using 0.8–1.0 mm punch with a motorized machine. All the grafts were placed in the petri dish in chilled Ringer’s Lactate solution. At the end of the procedure, the grafts obtained by FUT and FUE were counted. An antibiotic ointment was applied on the donor area and a dressing was used for overnight. Oral antibiotics were prescribed for five days. Any complication arising in these patients was noted and managed accordingly.

In majority of the patients more than 2500 grafts were harvested (Figure 3). 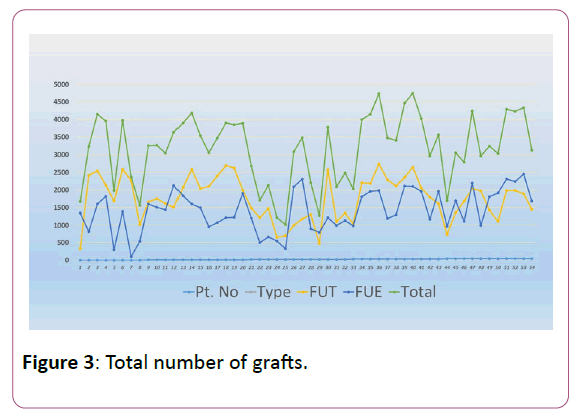 Modern day hair restoration is characterized by the maximum number of hair follicular units (FUs) which can be harvested from the donor area safely without having longterm implications. The introduction of motorized FUE has increased the number of FUs which can be harvested from a given area. However, it has resulted in overall increase in the ‘donor area’. At instances where the patients are interested to have maximum number of FUs in a single session, the surgeons are drawn towards the limits. Both FUE and FUT result in the removal of FUs from the donor area. In FUT, the vertical height of the donor area is reduced whereas in FUE the overall density is decreased. The combination of these two techniques in a single session has resulted in the increase in total number of FUs. Tsilloni has reported an average of 29% increase in the total number of FUs 4. The technique is also useful in the patients in whom the scalp mobility is limited and would not permit a long session.

The choice of performing FUE or FUT first remains with the expertise of the surgeon. In the current studies, FUT was performed after checking the vertical scalp mobility and then FUE was performed [6]. An area of about 1 cm on either side of the suture line, avoided any damage to the sutures by FUE punch plus the chances of the needle/suture to cut through the FUE sites were minimized. Care was taken near the wound edges. This subsequent FUE resulted in easing out the pull on the wound margins.

A few reports leave an untouched strip of about 1–2 cm which is used for the next session [2,5]. In our opinion, with the modern day techniques of strip harvest and higher quality of FUE punches, it is not required. Moreover a few grafts less in the next session from strip area will not make a huge difference in the outcome of the surgical procedure. On the contrary, the authors leave 1 cm area devoid of FUE on either side of the scar which would give a better outcome in strip scar. Another observation was noted that the patients undergoing extended hair transplant (combined FUT and FUE) experienced lesser postoperative pain than the patients undergoing FUT alone.

Combining both the techniques increases the total number of grafts which gives more impact and results in patient satisfaction.