Autologous fat transfer has become a mainstream procedure in plastic surgery and has now expanded into the dermatology specialty. Both microfat and nanofat are used and have shown to be acceptable approaches to body contouring, shaping of dimpled areas, and filling and sculpting facial features. Fat grafting has also been performed for aesthetic restoration of the hands to camouflage dorsal hand extensor tendons and veins that results from fat atrophy and thinning skin with age and certain medical conditions, identical to the cosmetic concerns often encountered for the dorsal foot [1]. Different geographic locations and various demographics navigate trends in types of procedures requested. In south Florida, most people wear open shoes and sandals or are barefoot most of the time. To some, foot aesthetics is a concern and different treatments are sought in effort for people to be comfortable, confident, and happy with their appearance. Although cosmetic procedures of the foot are controversial from a practitioner perspective, there is no limit when providing a safe, low risk, and effective treatment [2]. This is a case presentation of a fat transfer to the foot. The fat transferred to the plantar aspect of the foot is to assist in offloading high-pressure areas causing pain with ambulation. Autologous fat transfer to the dorsal aspect of the foot is an approach for a more youthful and healthy appearance to the feet, analogous to the fat transfers of the hands.

In April 2018, a 55-year-old female presented to our office with her husband. She related a past medical history of peripheral neuropathy due to a cervical spinal injury and gynecological surgery. The spine injury left her necessitating pain management for her back including Oxycontin, Xanax, Ambien, and Trazadone. She is a smoker and understood that fat transfers in patients who smoke have poorer outcomes with being a 10 pack year smoker. She had an allergy to penicillin [3,4]

The patient’s main complaints were two-fold. The first, as she quoted, was the “pounding that was placed on her heels and the balls of her feet with each step”. Functionally, ambulation was difficult due to the pain she felt “walking directly on the bones” with a constant force and pressure. Her activity was minimal secondary to the pain and pressure of walking. Walking barefoot and in shoes was difficult for her and her activities were diminished because of the pain she was experiencing. Eventually, she found herself homebound due to the pain in her feet. She had attempted conservative care for plantar fasciitis and heel spur syndrome with cortisone injections, orthotics and shoe inserts, and physical therapy; all to no avail. Her second complaint was the cosmetic changes to the top of her feet. Aesthetically, she had watched her feet undergo appearance changes with thinning of her skin, and prominent veins and tendons. The fat atrophy caused wasting of tissue and visibility of the extensor tendons on the dorsal aspect of the foot. She felt uncomfortable and insecure walking barefoot or in sandals and often hid her feet.

Specifically, the examination of the lower extremities focused on neurologic, vascular, dermatologic, and musculoskeletal findings. The neuropathy affecting her feet was minimal and she had intact sensations with a Semmes-Weinstein Monofilament. She had hypotonic muscular tone overall, but she had no loss of muscle function. Her vascular status was also intact and she had good digital capillary responses and pulses. The dorsal veins were visible with a clear outline of the venous system to the foot. Dermatologically, she had no open ulcerations, skin cancers, or concerning lesions. There was a loss of turgor to her skin, likely from decreased lubrication of the adipose tissue from lipoatrophy. She had a cavus foot type that was partially compensated during gait but the extensor substitution hammered digits contributed to the bowstrung appearance of her tendons. The feet had a mild hallux valgus and hallux interphalangeal position, a prominent Tailors bunion, and hammertoes. The dorsal aspect of the foot had fat atrophy with thinning across the midfoot at the tarsometatarsal apex of the cavus foot. Plantarly, the submetatarsal heads were prominent and palpable as well as the heel with obvious atrophy of the plantar fat pad to the ball of the foot and heel. She had mild pain on palpation of the plantar fascia and had been treated previously for heel pain syndrome. Previous treatments were not successful and included orthotic shoe inserts two cortisone injections, physical therapy, and other modalities such as stretching, heel lifts, and massage. The cortisone injections likely contributed to her lipoatrophy of the heels.

After the evaluation of the patient and discussion, a decision was made to perform a fat transfer to the plantar and dorsal feet. An autologous fat transfer was performed at an ambulatory surgery center under monitored anesthesia care with a local anesthetic. A plastic surgeon performed contoured liposuction of the abdominal region using a 3 mm Mercedes cannula on suction and was collected into a sterile fat collection canister. The supernatant fat was allowed to separate with a centrifuge at low speed for 3 minutes then additional decanting performed. The oil and fluid layer was removed and Ancef 1 g was added to the residual adipocytes. Using a blunt microtip injector with 1 cc tuberculin syringes, the adipose tissue was placed into the foot as follows. Harvesting techniques and care of the tissue should be minimally traumatic with a small cannula size [3-5].

On the plantar aspect of the foot the approach for the submetatarsal one region is on the plantar medial aspect of the first metatarsal neck and plantar lateral for submetatarsal four and five. Submetatarsal two and three are approached through the plantar foot. Care is taken to stay within the subcutaneous layer with focus to inject the submetatarsal heads and neck regions. The heel is approached through a medial and lateral portal at the level of the inferior calcaneal medial and lateral processes. An 11 blade is used to make a skin puncture and the micro tip cannula is inserted. This is a preferred method over a sharp needle injector as the blunt tip of the microcannula cannot harm any neurovascular structures. The cannula is inserted and moved to the desired position. This can be felt by tenting the skin until you can feel the cannula against the external surface. A pass is made with the microtip cannula and the adipose tissue is inserted retrograde upon removal of the cannula. A fanlike motion technique is used to target placement, with micro aliquots of fat injected with each pass. Approximately 1.0-1.5 mL of adipose tissue is placed per submetatarsal one through five and between 3.0-5.0 mL are injected into the heel.

Post procedure protocol includes offloading pads and a stiff soled post-operative shoe for with limited weight bearing and no massage to the treated areas for two to four weeks. The patient was followed for six months post procedure and seen again at two years.

Dorsal foot pre procedure photos show prominent extensor tendons and an atrophied skin texture and turgor with a noted outline of the vascular structures. Post-procedure photos at six months show an improvement of the aged appearance with loss of definition of the tendon structures and the skin has a healthier, more lubricated and vibrant tone, although some of the fat transferred has atrophied. Two year follow up photos show that even more of the transferred fat has atrophied but the texture and turgor of the skin continues to appear well maintained (Figures 1 and 2). 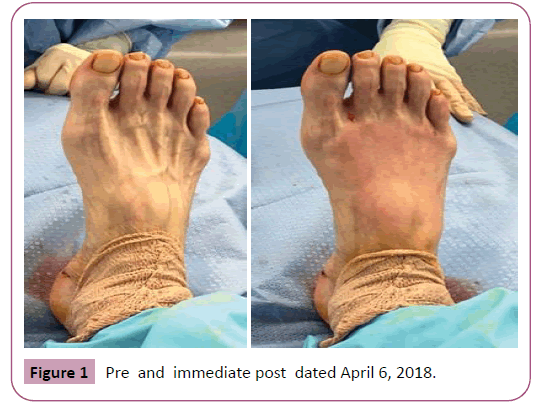 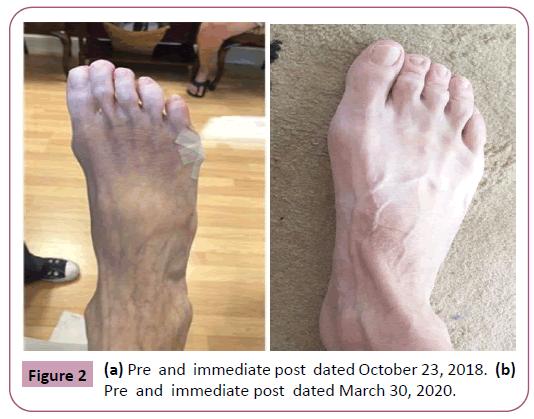 Fat pad atrophy is a condition where the patient’s nature adipose tissue in the foot diminishes or displaces [6,7]. Common causes include autoimmune and connective tissue disorders, cavus foot types creating anterior displacement of the ball of the foot pad, cortisone induced lipoatrophy, traumatic atrophy, and systemic conditions such as thyroid and hormone changes and diabetes and neuropathy. As fat pad atrophy progresses in an individual the natural shock absorption of the adipose tissue is lost causing an increase in peak pressure forces on the foot with walking and other activities and can contribute to neuropathic ulceration formation leading to infections and amputations of the foot [7,8]. Furthermore, with lipoatrophy the lubricative effect of the fatty layer to the dermal tissues is also lost as reported by an improvement of dermal texture and turgor seen with fat pad restoration [9]. Fat pad atrophy has shown to cause devastating pain to people with an increased interest in restorative processes of the lost fat.

From a pain perspective, fat pad restoration with autologous fat transfers has shown to decrease plantar foot pressures with ambulation allowing an improvement of activities and shoe wear. Although preliminary reports indicate improvement of pain scales with plantar fat pad transfers, nothing has been reported to show the benefits of autologous fat transfers to the dorsum of the foot [10,11]. Aesthetically, transferring fat to the foot that appears to have prominent veins and tendons with a thinning presentation, can provide a more youthful appearance improving self confidence with the use of open shoes or walking barefoot. Analogous to hand rejuvenation, fat transfers to the dorsal foot provide anti-aging improvement. Although it can be expected that a percentage of fat transferred is lost [12], the improvement in quality of life is significant. From creating cushioned comfort with walking to a more youthful appearance to the foot, autologous fat transfers can be extremely helpful to the patient who so desires.

Autologous fat transfer to the plantar and dorsal foot is acceptable and successful treatments for two indications. The plantar foot transfer is to provide cushioned comfort with ambulation and the dorsal fat transfer provides a youthful, aesthetic appearance.